Wizards, today we’re sharing a bizarre piece of the franchise history, one that our older readers may not so fondly remember — the great spoiler era. The spoilers era starts in 2005, when Aaron Lambert (20 at the time), manages to steal a copy of the Harry Potter and the Half Blood Prince from a secure distribution center in Corby, Northamptonshire.

As written by the Guardian:

“Lambert’s plan was to try and sell copies of the book to the newspapers, hoping they would pay large sums of money to reveal the novel’s secrets. He thought he had arranged separate deals with the Sun and the Daily Mirror to sell the books, the sixth in the bestselling series written by J K Rowling, for £50,000 and £30,000 each. But Lambert, a bodybuilding enthusiast who took steroids, was arrested the following day, on June 3, when the newspapers contacted the police.”

After the Lambert incident, J.K. Rowling amped up security, introducing GPS trackers, guarded warehouses and more security features, but regardless, the book was leaked and picked up by the internet.

Actual, real people were shouting out the quote at book sale events, printing posters, T-shirts and even car stickers, all in an effort to spoil the book for anyone who was buying it: 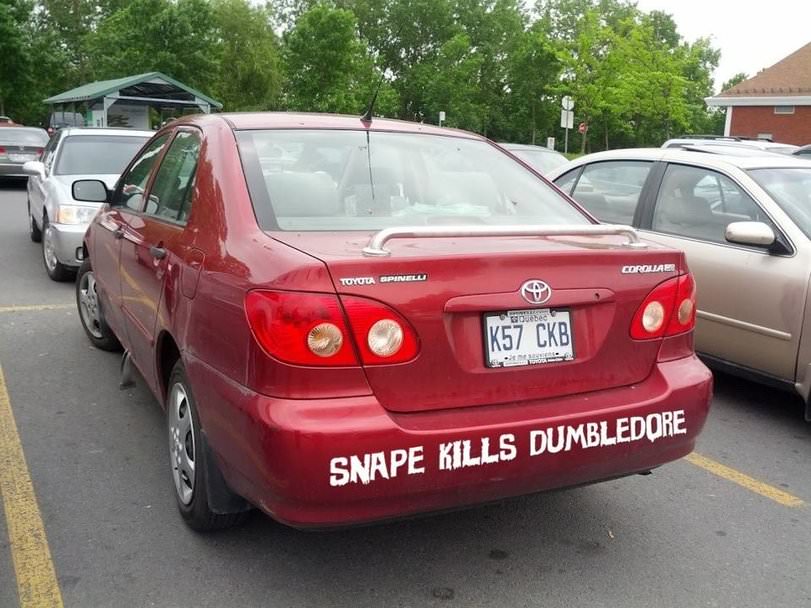 The spoiling finale took place on the official HP Forums, where bots were making hundreds and hundreds of user accounts each day, only to post and to promote the spoiler in numerous threads around the forums.

Despite the increased security efforts from J.K. Rowling’s end, which included armed guards, surveillance and more GPS trackers, the final book was leaked by DeepDiscount.com, a retailer that sent out some copies of the “Deathly Hallows” a week earlier than they were supposed to be shipped. Oh my.

On July 18th 2007 — the day of the last Harry Potter book release in the US and London — armies of angry boys from the internet start invading sale events, shouting numerous spoilers while driving around the block:

The great spoiler finale took place on the official Potter forums again, where someone managed to hack the portal and send a message to every registered user. The message contained literally every imaginable spoiler and thousands of dedicated readers got their ending spoiled.

Featured video is “The Harry Potter Skirmishes” by the Internet Historian, a great Youtube channel we strongly recommend you check out.